By Siena Oristaglio and Winter Mendelson on August 9, 2017 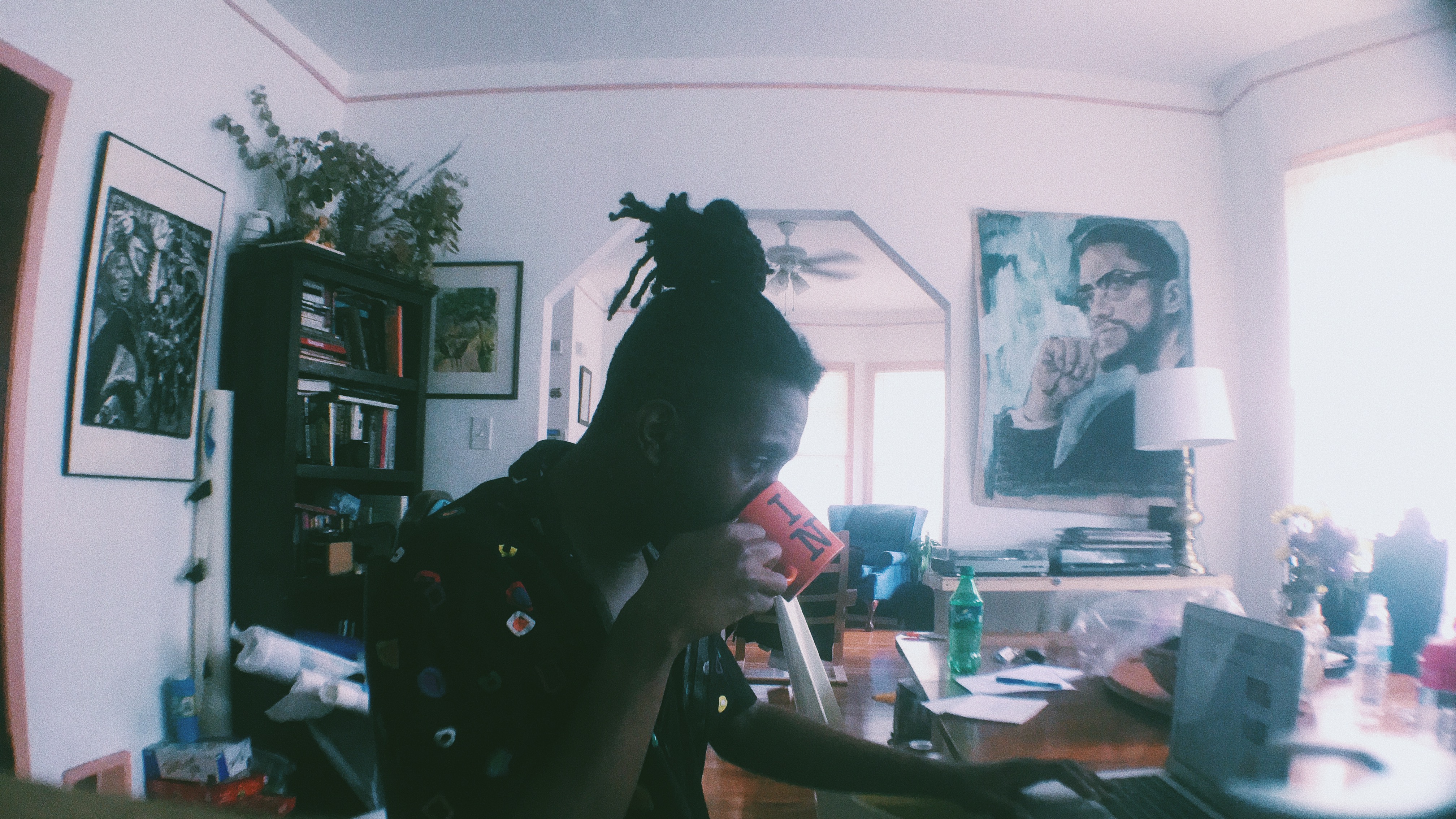 jayy dodd is a writer, editor, and artist originally from LA. Their work is often focused on issues surrounding identity and the Black body, and in particular bringing awareness to the many ways in which white privilege inflicts violence on people of color. We chat with them here about their unique usage of Twitter and how they use the internet as a tool for their personal growth and artistic practice.

Siena Oristaglio: To get started, how do you describe your artistic work?

jayy dodd: I think that it's hard for me to explain my art as anything at first because I make art intentionally, but what I do on a daily basis doesn't feel like an art form. I'm semi-professionally being an artist and writer in a really strange way. What I do is not only writing, though. I’m a public intellectual who writes and makes art and music. But I can't tell anyone how to do anything. I can only show how I'm doing it, and I make that very clear. I have to be what I know is real because I am either unseen or always seen in the shadows of culture. Basically, I do not want to be known in the world as a musician, but I do release albums. I’m better at poetry and I like talking to people.

I have to be what I know is real because I am either unseen or always seen in the shadows of culture.

SO: That's awesome, and I'm interested in discussing the way that you use the internet. I know that you have a great TinyLetter and a very unique website. And then of course you also use Twitter to provide content and education. What's your favorite part about the tools that the internet provides you with?

jd: My relationship with the internet began when I was seven or eight. My mom was really interested in technology. We also lived in LA so technology was sort of cooler there, and it didn't seem weird to have internet. The only emails I got were my grandmother sending me holiday cards and then like nickelodeon.com or whatever little kids’ sites I would visit. I never thought that the internet was a scary place. I went to High School in New England during the year that Facebook opened up to High Schoolers. At the time, I realized that most of my friends in LA were black and brown and people of color. They didn't really fuck with Facebook, but most of my LA white friends had a profile. I was fourteen at an all-white school in Connecticut, and I didn't know a thing. The kids with access to the college world had a two- or three-year jumpstart on Facebook, but most of my friends in California, by senior year, had actually transitioned to Facebook. There was a real gap when I had both a Facebook and a Myspace and I had to think about my audience, as in, "Who am I talking to?" I realized that on Facebook I was talking to a bunch of white kids and on MySpace I was talking to all of my POC friends. I didn't even know what the term “audience" meant at that time, but I definitely knew that I had two different groups of people that I had to communicate with. I didn't want to lose myself in either place, so I changed my language to what felt authentic for each. Also, when I was a junior in High School, I got on Twitter. I think I was in the first 10 million users. Within a year I was tweeting and on my game.

I started writing blogs in college and became more of an internet intellectual. I developed a regional name as being an important black voice in this area, but then they got too white and I had to stop because I was getting woke in college, so I stopped giving them my labor. From there I worked for some political blogs, but the article that got me on the map was about Beyoncé in my senior year. I quickly jumped from writing regionally to Huffington Post, although they also did not pay me. Before that, people would sometimes say shit to me offhand if I said something political, but nobody had really come after me until I started writing for Huffington Post. I wrote about Macklemore mass-marrying gay people and everyone hated me for that. I wrote about white men being unimpressive, and of course the white men came out in droves. I hated getting death threats and dealing with the comments so I had to block people often. One thing I'm proud of is that I unfollowed every white person on Twitter who I did not personally know. I didn't block them, but I blocked them and unblocked them so they were unfollowing me, and I only followed white people that I knew or after they either bought my book or donated to me.

My Twitter gives me access to people across the board who I want to invest in and I appreciate what they invest in me. I love that I can say a lot more on Twitter and I write a lot more there because the format is built for it. If you want to find me, go on Twitter. I'll be there waiting with something to say or a beautiful soliloquy, or I'll be an asshole.

My Twitter gives me access to people across the board who I want to invest in and I appreciate what they invest in me.

SO: I saw that you crowdfunded for the Lambda retreat through Twitter and you also offer the ability to commission a poem through your website. What is your relationship to the way you use the internet to raise funds?

jd: I think I started crowdfunding a couple years ago. I had a part-time job until last summer, so I didn't need to do it as much, but once I moved to Detroit, I had to start over. My family loves me and would help if they could, but they have their own struggles. I eventually got a patron from Twitter and he started giving me $40 every Monday for over a year. Honestly, that pretty much changed my life every week. I sort of internalized some of the millennial shame put on us about needing to work more and then I realized, no, I've had a job since I was fourteen. I worked while I was in school. I know how to be a hard worker. Yes, I'm mad depressed and live with anxiety. I'm also trying to transition, and that's why I can't leave my house. It's hard for me to work, but I do have skills that make me worthy of pay. I realized that I'm not a charity case, I am owed. I'm owed so much. Before, and parallel to a case of reparations, I am owed. My dream is for everything I need to be taken care of so I can also give money away to others who may need it.

Thus far, I'm not like, "making money," off of this. Well, I am making money, but not in the traditional sense of making a living. I'm making money as in, "I need money to survive and I'm not dead." I also don't want the people's lives who my work is changing to be the ones paying my bills. Those whose lives I'm changing are people who need my work for free, because I needed this work for free. I needed Langston Hughes and Audre Lorde and all of them for free. If there was an economy that focused on impact, people like you and I would never have to work. People's drives would be different, their motivations would be different, everything. So I feel like the way that I even approach art, knowledge, and intellectualism — whatever this is that I'm trying to undo — is taking what it has built and divesting from where it's from.

Winter Mendelson: Yes, for sure. I'm curious what being an internet artist or an internet intellectual means to you?

jd: For me it's about accessibility. Even with Twitter and the internet, there are people who can't access me and I'm always aware of that. I need to do what I do on Twitter, I think, in person. I can have a conversation about great issues in general with my neighbor much easier and much different than I could ever online. Any pride I take in the term ‘intellectual’ is that in my core self I care more about knowledge, clarity, message, and prophesy than anything else. I don't want to be weighed down by anything other than my body. I'm happy that I'm in my body and I'm happy that I'm able to publicly document my transition because I document myself all anyway, so people are going to start to notice. I'm already where I am in my gender, whatever that is, but I am not where I am in my body. I don't feel unvalued in my body even if it's not the body that I want. I feel that the internet allows me to both expose myself and always be open. jayy dodd is a blxk question mark from los angeles, california – now based on the internet. they are a professional writer & literary editor. their work has appeared / will appear in Broadly, The Establishment, Entropy, LitHub, BOAAT Press, Duende, & Nashville Review among others. they’re the author of [sugar in the tank]  (Pizza Pi Press 2016) & Mannish Tongues (Platypus Press 2017). their collection The Black Condition ft. Narcissus is forthcoming on Siren Song / CCM Press. they are a Pushcart Prize nominee, co-editor of Bettering American Poetry & a 2017 Lambda Literary Fellow. their work has been featured in Teen Vogue & Entropy. find them talking trash online or taking a selfie.

GET OUR FREE ARTIST GUIDE!

Jump on our mailing list to instantly receive our step-by-step guide to help you build emotional and financial sustainability as an artist or creator.

We promise not to spam you.